What does lavender ceiling mean?

Lavender ceiling is a glass ceiling specifically imposed on LGBTQ people: an unofficial upper limit to their professional advancement.

Lavender ceilings are the result of systemic bias and discrimination against LGBTQ people in the workplace and in society more broadly.

Where does lavender ceiling come from? 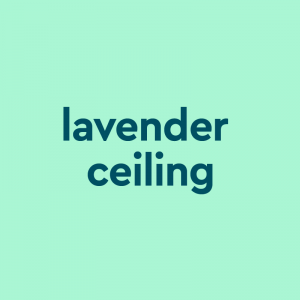 Lavender ceiling is a variation on glass ceiling, a metaphorical expression which dates back to the 1980s. Ceiling represents a barrier to how high a woman or other member of a minority group can rise within the ranks of their profession. Glass characterizes this barrier as invisible—that is, it is not readily perceived or openly acknowledged in the dominant culture, especially due to institutional, structural biases and discrimination against members of minority groups.

While the term glass ceiling has been especially applied to the professional realities of women, it can also encompass those of other marginalized groups. Glass ceiling has also prompted more specific variants, such as bamboo ceiling, with respect to the experiences of Asian Americans, and lavender ceiling, for the LGBTQ community.

Why lavender? The pale bluish purple color of lavender has been pejoratively associated with gay people since at least the 1800s, originally in the context of fashion. Coinciding with the second Red Scare in the mid-1900s, the so-called “Lavender Scare” was a moral panic around the supposed threats of gay people to the U.S. Since then, many in the LGBTQ community have reappropriated lavender, word and hue, as an expression of Pride.

Evidence for lavender ceiling can be found in mainstream publications in the early 1990s, notably used in interviews of people who argued that gay people had a much harder time advancing in their careers due to forms of unacknowledged discrimination against sexual orientations in the workplace.

For example, a Los Angeles Times article from May 17, 1993 referenced the lavender ceiling, reporting on gay people who felt forced to hide their being gay or lesbian out of fear of workplace discrimination. Similarly, in an interview for the March 1994 edition of The Advocate, then Random House managing editor Mitchell Ivers used lavender ceiling when discussing difficulties gay authors face in the publishing industry.

Even though LGBTQ rights have expanded since the 1990s, and despite the fact that the LGBTQ community is more visible and supported in mainstream culture than ever before, lavender ceiling, as a term and lived experience, persists for many. Bias and discrimination against LGBTQ has certainly not gone away.

Lavender ceiling is most frequently used by LGBTQ persons and allies, especially when a person is the first to achieve a position an LGBTQ person has never had before—when they are said to have “broken” or “shattered” the lavender ceiling.

A lot of great LGBT films have been passed over by the Oscars. @Moonlight finally broke thru the lavender ceiling. https://t.co/Frl0KV6ce9

Out NBA player Jason Collins cracks the 'Lavender Ceiling' – not so much with his height, instead by standing tall for equality. #LGBT #GAY

LPAC endorsee @joliejustus ran a great campaign to become mayor of Kansas City, but came up just short. We're disappointed the lavender ceiling in KC remains unbroken, but are proud to have been in Jolie's corner.

This is not meant to be a formal definition of lavender ceiling like most terms we define on Dictionary.com, but is rather an informal word summary that hopefully touches upon the key aspects of the meaning and usage of lavender ceiling that will help our users expand their word mastery.