What does Megxit mean?

Megxit is a slang term for the decision of couple Meghan Markle and Prince Harry to step back from their senior roles in the British royal family.

Where does Megxit come from? 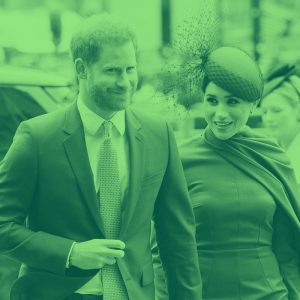 On January 8, 2020, Meghan Markle, Duchess of Sussex, and her husband, Prince Harry, Duke of Sussex, announced on Instagram that they “intend to step back as ‘senior’ members of the Royal Family.” In the post, the couple also indicated they aim to become financially independent and split their time between North America and the UK.

“After many months of reflection and internal discussions, we have chosen to make a transition this year in starting to carve out a progressive new role within this institution. We intend to step back as ‘senior’ members of the Royal Family and work to become financially independent, while continuing to fully support Her Majesty The Queen. It is with your encouragement, particularly over the last few years, that we feel prepared to make this adjustment. We now plan to balance our time between the United Kingdom and North America, continuing to honour our duty to The Queen, the Commonwealth, and our patronages. This geographic balance will enable us to raise our son with an appreciation for the royal tradition into which he was born, while also providing our family with the space to focus on the next chapter, including the launch of our new charitable entity. We look forward to sharing the full details of this exciting next step in due course, as we continue to collaborate with Her Majesty The Queen, The Prince of Wales, The Duke of Cambridge and all relevant parties. Until then, please accept our deepest thanks for your continued support.” – The Duke and Duchess of Sussex For more information, please visit sussexroyal.com (link in bio) Image © PA

This decision—which was met with a range of reactions, from shock to cheers to criticism to anger—was quickly dubbed Megxit by British tabloid The Sun. The term (along with many other such formations) riffs on Brexit, the probable withdrawal (exit) of the UK from the European Union.

The Sun wasn’t the first to blend Meghan and exit into Megxit, however. On social media in 2018–19, some used Megxit to insult Meghan Markle and express a desire for her to leave the British royal family. Some of these insults appear to have a racist and sexist character. British tabloids have been widely accused of such racism and sexism in their treatment of Markle—which many attribute as motivating, in part, the couple’s desire for a more private life.

The Megxit again became primetime news in early March of 2021. On March 7, CBS released an exclusive interview of Prince Harry and Meghan Markle by Oprah Winfrey. During the interview, Winfrey repeatedly used the word Megxit to refer to the couple’s decision. The interview was the first given by the couple since the so-called Megxit and revealed many shocking details about their treatment by the royal family and their decision to split from the family. The couple revealed scandalous bombshells about the royal family, such as Prince Harry’s friction with his father, Prince Charles, a general lack of support from the royal family, the royals expressing concerns about their baby’s skin tone, and Markle having suffered from suicidal thoughts.

#Oprah: We’ve seen in the press that you’re responsible for this Megxit. It was all intentional to build your brand. #MeghanMarkle: That’s absurd. I left my career, my life, I left everything because i love him. #OprahMeghanHarry

Meghan went in, rescued her prince, left a note & bounced. Boss move. #Megxit
@MorganincInk, January 9, 2020
Prince Harry claims the Queen invited him and Meghan Markle to stay at the Sandringham estate during Megxit negotiations—before cancelling the visit. The Duke of Sussex says they were meant to stay there overnight having got back from Canada on January 6.
Tom Towers, Daily Star, March 8, 2021
News about the Duke and Duchess' plans to "carve out a progressive new role"  in the Royal Family "institution" was met with both shock by some and hearty applause by others and the term 'Megxit' was coined.
Lucy Pavia, Evening Standard, January 9, 2020
SEE MORE EXAMPLES

Megxit spread as a shorthand for Markle and Harry’s decision to step back from their senior royal roles and duties in the press and on social media, where it is often used as the hashtag #Megxit—and used to voice the many opinions people have about Markle and Harry.

Seeing the press reaction to Megan and Harry’s announcement, just confirms why they’re right to step away. Good luck to them. #Megxit

I say good for them… What do you think? #Megxit

Megxit is also used in various humorous observations on the event.

Others have proposed Sussexit as another Brexit-inspired name for the decision.

Suggestion: Stop calling it "Megxit." This amplifies & perpetuates the vilification of Meghan that led to Harry's & her joint decision. However you feel, it's clear that, for now, the Sussexes are a unit who make choices & moves as a team—plus he's been at this longer. #Sussexit pic.twitter.com/8MRquUfKcN

This is not meant to be a formal definition of Megxit like most terms we define on Dictionary.com, but is rather an informal word summary that hopefully touches upon the key aspects of the meaning and usage of Megxit that will help our users expand their word mastery.