What does tinfoil hat mean?

Government trying to control your mind? Aliens? The Illuminati? Simply place a tinfoil hat on your head to block their signals, as the trope popularly goes. Tinfoil hat is a shorthand for saying someone believes in conspiracy theories, is paranoid, or is crazy more generally.

Where does tinfoil hat come from? 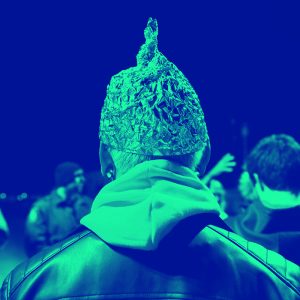 In the 19th century, a tinfoil hat was a kind of party hat. The phrase took a turn, though, in the 20th century. A 1920s sci-fi short story, “The Tissue-Culture King” by Julian Huxley, featured characters wearing “caps of metal foil” to evade mind-control waves.

Huxley’s headwear illustrates the core concept of the tinfoil hat: It acts as a kind of Faraday cage to block various kinds of electromagnetic waves. We can find the specific phrase tinfoil hat in the 1980s, by which time it had become associated with individuals who would wear them in the belief they would protect them nefarious rays seeking to surveil, brainwash, or otherwise influence them.

In the 1980–90s, tinfoil hat became a shorthand for a “conspiracy theorist”—you know, JFK, moon landing, and later, 9/11 truthers. A 1997 internet commenter observed that tinfoil hat was “the oldest insult” on Usenet.

Nevertheless, the tinfoil hat became a full-fledged trope in popular media in the 1990s–2000s. In a 1999 episode of The Simpsons, Bart becomes a paranoid conspiracy theorist wearing a tinfoil hat because he fears Major League Baseball was spying on everyone. Spoiler alert: He was right. 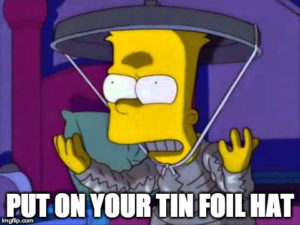 In the 2002 film Signs, Mel Gibson’s character and his family don tinfoil hats to keep aliens from reading their minds. (Too bad it wasn’t effective at blocking racism and antisemitism, though.) In the late 1990s and 2000s, the cartoon Futurama regularly featured a tinfoil hat-wearing character with some really far-out—veritably cosmic—prophecies.

In a 2015 episode of the TV show Better Call Saul, a character wraps himself in space blankets to shield him from electromagnetic radiation; he’s threatened with being committed to a mental hospital. 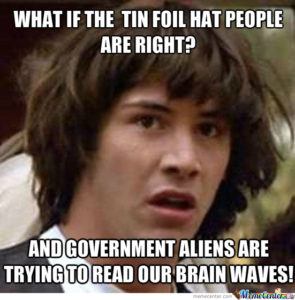 Tinfoil hat is widely used as an insult for acting crazy or believing in nonsense or “out-there” ideas, including conspiracy theories.

I love the tinfoil hat progressives that see how quickly 65 women, who were all willing to sign on to a public letter supporting #Kavanaugh using their actual names and have spoken on the record, as evidence of the Judge's guilt.

Yes Leo… it is unbelievable, in fact… most would call it a straight out lie, conspiracy theory. Do you have your tinfoil hat on today sir?#cdnpoli #TheCPCLostBoys https://t.co/Es1MVLjTym

People who suffer from genuine mental illnesses, such as schizophrenia, have discussed wearing actual tinfoil hats when dealing with intrusive thoughts and hallucinations. A 2005 study showed, though, that a tinfoil hat actually actually amplifies radio frequencies instead of blocking them. But just in case the Lizard People are listening…[*pulls out aluminum foil roll*]

This is not meant to be a formal definition of tinfoil hat like most terms we define on Dictionary.com, but is rather an informal word summary that hopefully touches upon the key aspects of the meaning and usage of tinfoil hat that will help our users expand their word mastery.