G.A.Y. is a backronym for gay standing for Good As You. It is meant to transform the historic use of gay as a slur into an expression of gay Pride.

Where does G.A.Y. come from? 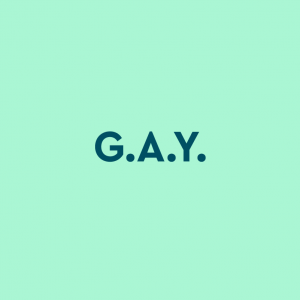 The term gay has referred to someone who exhibits sexual desire or behavior toward a person or persons of their same sex since at least the 1930s. Historically, gay has been used as an extremely offensive slur, evening evolving into a catch-all insult for “stupid” in the 1980–90s.

However, in large part due to reclamation by Gay Rights activists over the decades, gay has since become a preferred term to refer to gay men—and preferred over homosexual, a term that comes with a lot of painful baggage. Learn why in our recent new words update, “Dictionary.com Releases Its Biggest Update Ever.”

It’s hard to tell when exactly G.A.Y., a backronym for good as you, caught on in the LGBTQ rights movement, but the 1994 founding of Good As You Bangalore, an LGBTQ support group in India, helped cement it as a sometime slogan for sexual equality. G.A.Y. allows activists to re-appropriate a label while making the incisive comment that heterosexual people are no better than them.

Other notable instances come from Jeremy Hooper, the LGBTQ activist and author of If It’s A Choice, My Zygote Chose Balls who founded Good As You in 2005, a website dedicated to LGBTQ activism. Hooper has used the Twitter handle @goodasyou since 2007.

Being nakedly anti-gay is still a stance that might cost you jobs, friends, and respect in 21st century society.

But hey, go ahead and celebrate a narrow ruling that you likely didn’t even read and don’t really seem to understand.

The Italian film Good As You was protested by the Catholic church for its LGBTQ themes when it premiered in 2012. Paul Flynn’s 2017 book about gay British culture is titled Good As You: From Prejudice to Pride—30 Years of Gay Britain.

Good As You has also been used as a song title, including by Eternal Summers in 2012 and Sundressed in 2015, though these instances are about heartache, not gay Pride.

Time’s up Gloves off You won’t like hearing it, but GAY = #GoodAsYou & opposing #SSM is bigoted #LGBTI #EqualMarriage
@rainbowreporter, August 16, 2015
Well, Good As You … G-A-Y … get it? But our name is more than just a convenient acronym, it is the message that influences our every action.
Jeremy Hooper, Good As You, 2005
You know in this country gay stands for Good As You
@Formula_Ward, September 2, 2020
SEE MORE EXAMPLES

G.A.Y. is sometimes used by the LGBTQ community to proudly declare equality in reference to a historically painful slur. It’s frequently seen on signs at Pride parades and on social media.

Rumors persist that good as you is the origin of using gay for a homosexual man or LGBTQ person more generally, but that’s bogus etymology (à la golf coming from Gents Only, Ladies Forbidden). It was made up after the fact.

A 2010 Urban Dictionary post states that G.A.Y. stands for good at yoga, but the evidence for this is lacking, not even on flyers for gay yoga classes.

We are incredibly proud to contribute to the rich LGBTQ2+ community in Dufferin County by providing space for the extraordinary Chris Chihrin to teach Gay Men’s Yoga on Friday nights. Tonight’s class is restorative and there are drinks out planned afterwards. #practisewithpride (now that hashtag makes sense, right?) #yogaeverydamnday #gaypride #inclusionmatters #gayyoga #dufferin

This is not meant to be a formal definition of G.A.Y. like most terms we define on Dictionary.com, but is rather an informal word summary that hopefully touches upon the key aspects of the meaning and usage of G.A.Y. that will help our users expand their word mastery.