What does diamond hands mean?

Diamond hands is a slang term for an investor who refrains from selling an investment (such as stock shares) despite downturns or losses. It can also refer to such an investor’s resolve or stubbornness.

Use of the term diamond hands was popularized by users of the subreddit (forum) /r/WallStreetBets, where it is thought to have originated.

The term diamond hands is commonly expressed in emoji as 💎🙌 (a combination of the Gem Stone emoji 💎 and the Raising Hands emoji 🙌).

Example: Big loss on my GameStop stock today, but call me diamond hands 💎🙌  cause I’m not selling.

Where does diamond hands come from? 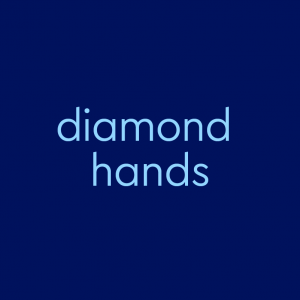 The word hands in diamond hands is likely a reference to “holding” a stock—maintaining possession of it (and not selling it). Diamonds are famous for their hardness. If a person is said to have diamond hands, it means they are hardened against market fluctuation and will “hold” their stock no matter how low its value goes (in anticipation of a future rise in value). The term paper hands is sometimes used to mean the opposite of diamond hands in reference to an investor who will abandon an investment at the first sign of a decrease.

The slang diamond hands is thought to have originated on the forum website Reddit in the /r/WallStreetBets subreddit, where the term has been used since at least 2018. The term gained popularity in 2019, when multiple users began to frequently use the term in reference to persistently holding stocks. Depicting the term in emoji form also began to become popular during this time.

In 2021, diamond hands and other slang from /r/WallStreetBets gained wider attention due to the forum’s role in a widely discussed situation involving investment in what became known as meme stocks (those that see an increase in trading activity after gaining popularity due to some online trend, as if the stock has gone viral).

The term is particularly used in the context of investing in such stocks or holding cryptocurrencies like Bitcoin and Dogecoin. In May 2021, for example, a tweet from Elon Musk used diamond hands in emoji form, presumably in reference to holding Bitcoin.

How many $AMC stock have i sold? 0. Diamond hands, always
@JamesCullenB, June 5, 2021
Paper hands is a term used in the crypto community to characterize people who sell a digital asset such as bitcoin when turbulence strikes markets. It’s the opposite of so-called diamond hands, or ardent believers who say they will hold for the long term.
Pia Singh, CNBC, June 22, 2021

Diamond hands was popularized on the subreddit /r/WallStreetBets and later became more widespread on social media, especially in the context of so-called meme stocks and cryptocurrencies.

SHOUTOUT TO ALL DIAMOND HANDS 💎 🙌 💎 WE APPRECIATE YOU 🚀🌕 #SAFEMOON

people selling their dogecoin right now are dumb. i've got diamond hands i will never sell

This is not meant to be a formal definition of diamond hands like most terms we define on Dictionary.com, but is rather an informal word summary that hopefully touches upon the key aspects of the meaning and usage of diamond hands that will help our users expand their word mastery.