COVID-19 pandemic. It\u2019s usually used with <em>the<\/em>, as in <em>the Before Times<\/em>.\r\n\r\n<em>Before Times <\/em>is generally used in discussions that contrast the lasting and far-reaching effects (especially negative effects) of the pandemic to the way things were before it.\u00a0It\u2019s typically used in a way that\u2019s intended to be at least somewhat (darkly) humorous, perhaps likening the world after the start of the pandemic to a <a href=https://www.dictionary.com/"https:////www.dictionary.com//browse//apocalyptic/">postapocalyptic <a href=https://www.dictionary.com/"https:////www.dictionary.com//browse//dystopia/">dystopia./r/n/r/nIn contrast, the adjective <em>prepandemic<\/em> is often used in the same contexts, but it is used neutrally, without any humorous intent.\r\n\r\nExample: <em>I\u2019ve been in my house hiding from covid for so long that I can\u2019t even remember what it was like in the Before Times. <\/em>"},"categories":{},"excerpt":""}"/>
Feedback
the 6
The Chronic

What does Before Times mean?

Before Times is an informal term used to refer to the world as it was prior to the outbreak of the COVID-19 pandemic. It’s usually used with the, as in the Before Times.

Before Times is generally used in discussions that contrast the lasting and far-reaching effects (especially negative effects) of the pandemic to the way things were before it. It’s typically used in a way that’s intended to be at least somewhat (darkly) humorous, perhaps likening the world after the start of the pandemic to a postapocalyptic dystopia.

In contrast, the adjective prepandemic is often used in the same contexts, but it is used neutrally, without any humorous intent.

Example: I’ve been in my house hiding from covid for so long that I can’t even remember what it was like in the Before Times.

Where does the Before Times come from? 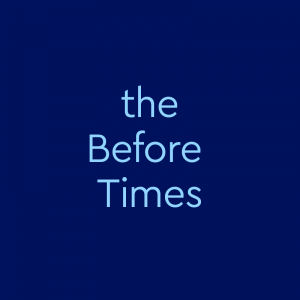 The term Before Times was popularized by the COVID-19 pandemic. It was used in reference to the prepandemic world from the very beginning of the pandemic in early 2020, but its origins are unrelated—and much earlier. The initial spread of the phrase and variations of it is often attributed to the science fiction TV show Star Trek, which used a version of the term in a 1966 episode. In the episode, a group of children use the term before time to refer to life before a plague killed most of their planet’s population.

The similar word beforetime is an archaic adverb meaning “formerly” whose first written records come from the 1200s. It is no longer in common use but may be encountered in old literature, such as the King James Bible.

<gazing dead-eyed into the middle distance> you'd never believe it, son. back in my day, in the Before Times, there was toilet paper as far as the eye could see. why, we'd string it from trees every halloween

I have a Zoom interview in a bit, which I guess means I will have to get dressed and put on mascara as I did in the Before Times.

Examples of the Before Times

My mask doubles as a feed bag and now I can never go back to the before times.
@thekimmartel, August 27, 2021
She was missing her other son, who works at a bank in Melbourne, and her grandchildren whom she hadn’t seen since “the before times.”
D. W. Gibson, The New York Times, February 14, 2022

Who uses the Before Times?

Before Times is typically used in statements intended to be at least somewhat humorous about the often negative circumstances and consequences of the pandemic and how they make the world feel entirely different than it was before it.

I am at a concert by myself. I used to do this in the Before Times but I forgot how. Send good vibes please 🎶✨

I vaguely remember hanging out with people and going places in the before times.

I avoid zoom hangouts the same way I avoided real life hangouts in the before times.
🌊🌊🌊🌊🌊

This is not meant to be a formal definition of the Before Times like most terms we define on Dictionary.com, but is rather an informal word summary that hopefully touches upon the key aspects of the meaning and usage of the Before Times that will help our users expand their word mastery.

the 6
The Chronic
Home / Words / Slang / the Before Times