What does ambigram mean?

An ambigram is a word, number, or other figure that looks the same or can still be read when viewed (or rotated) upside down. Sometimes, the new orientation yields the same exact sequence of characters in the same order; in other cases, it yields a different sequence (though one that is still readable or has a recognizable meaning).

NOON is a simple example of an ambigram—it still reads as NOON even when viewed upside down. See?! Another example is the word dollop.

Such ambigrams are said to have rotational symmetry, meaning they yield the same sequence when viewed (or rotated) upside down.

Ambigrams are different from palindromes, which read the same forward and backward. However, many simple ambigrams are also palindromes. The capitalized palindrome NOON is an example. (However, it wouldn’t be considered a traditional ambigram when it’s spelled in lowercase as noon, because when viewed upside down it looks like uoou, which isn’t commonly understood as a word or meaningful sequence.)

Number sequences can also be ambigrams. A few simple examples are the numbers 808 (also a palindrome) and 609 (not a palindrome).

Some dates are cited as ambigrams when rendered in numerical form. For example, the date December 2, 2021, can be considered an ambigram when rendered as 12-2-21 (or 12022021). (Note that this interpretation typically requires the numbers to be in the “digital” style common on digital clocks and calculators.)

All of the examples given so far are of naturally occurring ambigrams. More complex ambigrams typically consist of characters that have been highly stylized to achieve the effect. Such ambigrams are often used as logos or as elements in graphic design.

Example: I didn’t notice the logo was an ambigram until my hat fell upside down on the floor and I realized the image looked the same!

Where does ambigram come from? 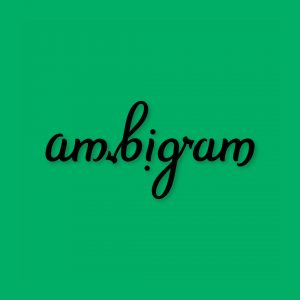 The coining of the term ambigram is often credited to scholar and writer Douglas Hofstadter, who used the term in the title of his 1987 book about them called Ambigrams: An Ideal Microworld for the Study of Creativity. However, ambigrams predate the term for them.

The word ambigram combines the prefix ambi-, meaning “both” (as used in ambidextrous and ambiguous), with -gram, which is used in terms that refer to something written (such as anagram and pangram).

Hofstadter’s work primarily focused on ambigrams rendered with calligraphy. Since then, as the form has become more well known, stylized ambigrams are often produced digitally.

Many people first become familiar with the word ambigram when it is used to refer to a certain date that can be considered an ambigram.

I recently realized the word “dollop” is a natural ambigram and now I love it even more.
@meyerweb, August 14, 2019
She had drawn an ambigram without realizing there was such a thing. With ambigram art, a word or words, or image is created so that it can be read in more than one direction.
Sara Gadzala, The Cincinnati Enquirer,  December 16, 2015

Ambigrams are often discussed alongside palindromes, anagrams, and similarly interesting phenomena, but they are also of interest in graphic design. Many people first become familiar with the term when a particular date or logo is pointed out as being an ambigram.

Today’s date (using U.S. style) is both a palindrome and an ambigram, which means it reads the same even if it’s flipped upside down. pic.twitter.com/g69PHcfbkn

Just finished my draft of a “she/they” ambigram (reads the same both ways up). pic.twitter.com/rPoL7bWXLP

This is not meant to be a formal definition of ambigram like most terms we define on Dictionary.com, but is rather an informal word summary that hopefully touches upon the key aspects of the meaning and usage of ambigram that will help our users expand their word mastery.