Feedback
Previous "Barbecuing," "Grilling," And "Smoking": What's The Difference? Next "Affect" vs. "Effect": Use The Correct Word Every Time

Over 15,000 entries updated on topics ranging from race and sexual orientation to climate and internet culture

The unprecedented events of 2020, from the pandemic to the protests, have profoundly changed our lives—and language.

As we explained in our April additions to the dictionary, COVID-19 rapidly introduced an array of new and newly prominent technical terms to our everyday vocabularies, including asymptomatic, viral load, and social distance.

The George Floyd protests against racism and police violence sparked a surge of searches that spoke to the power and passion of the cultural moment, not the least of which were Black Lives Matter and Antifa.

And on top of the public health emergency and cultural upheaval, we’re in the midst of an economic crisis, gripped by educational uncertainty, and navigating a contentious presidential election, all while we see the devastating impact of the climate changing all around us. It seems our 2019 Word of the Year, existential, is more apt than ever.

Change, no doubt, is a prevailing theme of 2020—and change is fundamental to the work of a dictionary.

This September, we have released our biggest update ever. Our tireless team has touched over 15,000 entries. You read that right: 15,000. These massive changes include:

Many of these updates—650 of them, as noted—are of the sort that usually win attention: the new words that define the culture, technology, and environment of our times. Ecoanxiety, emotional support animal, MeToo, and af (yes, that af) are officially in the dictionary.

But just as important as the new words we’ve added are the deeper revisions that document what drives us here at Dictionary.com: the ways language is constantly evolving. A great many of these entries we’ve updated address topics that touch all of us on the most personal levels: race and ethnicity, gender and sexuality, health and wellness.

One of the most comprehensive—and important—updates to our dictionary involves the capitalization of the word Black in reference to people. Capitalizing Black confers the due dignity to the shared identity, culture, and history of Black people. It also aligns with the practice of using initial capital letters for many other ethnic groups and national identities, e.g., Hispanic.

Not only does implementing this more respectful and consistent style impact all new entries involving the word Black moving forward, such as Afro-Latina, Afro-Latino, and Afro-Latinx, it also compelled our lexicographers to review and revise hundreds of existing entries.

What’s more, our lexicographers developed a whole new entry for Black in reference to people, separating that meaning from the lowercase word black whose dozens of definitions range from senses extending from a core meaning of darkness, to related senses involving dirt, and even metaphorical uses involving evildoing. In the dictionary world, separating the people-related definitions of Black from the other definitions of black is a major—and extremely rare—move. As a rule, different senses of words that share an origin, as lowercase black and uppercase Black historically do, are included under the same entry.

It’s a rule worth breaking. Dictionaries are not merely a linguistic exercise or academic enterprise. What are the effects of Black, referring to human beings, being grouped together with black, which can mean, among other things, “wicked”? The effects are social. They are psychological. They are personal. How words are entered into the dictionary—especially words concerning our personal identities—have real effects on real people in the real world.

Capitalizing Black joins many other dictionary-wide efforts to put people, not practices, first, and ensure our definitions reflect—and respect—how people use language.

Informed by GLAAD recommendations and APA guidelines, we have also replaced references to homosexual with gay, gay man, or gay woman as well as references to homosexuality with gay sexual orientation. For example, we now define gayness as “gay or lesbian sexual orientation or behavior” compared to the outmoded gloss of “homosexuality.” These changes alone affect over 50 entries. 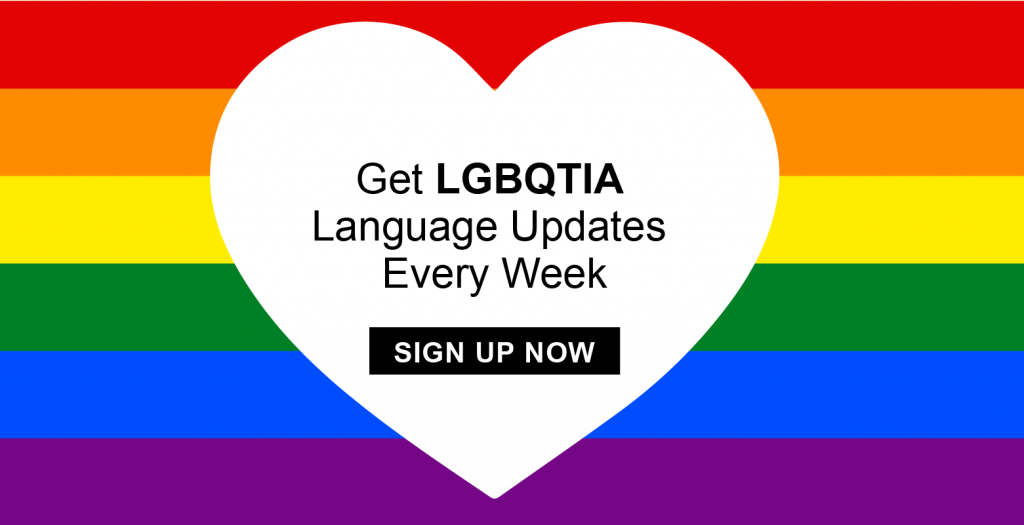 Not only do these revisions help eliminate heterosexual bias in language, they also help better convey the diversity and richness of—and take Pride with a capital P in—human sexual experience and identity.

We make a point to use the word Pride here. Our lexicographers have also developed a separate entry for Pride with an initial capital P to better document the specific, widespread use of the term:

Discover many more LGBTQIA-related terms in our update, such as ace, ambisextrous, asexual, biromantic, deadname, gender-inclusive, gender diversity, and trans+.

In addition to race, ethnicity, gender, and sexuality, personal health and wellness are other significant areas where language is evolving.

Improving nearly 20 entries, we’ve replaced all instances of commit suicide with die by suicide or end one’s life, language preferred by mental health professionals and suicide prevention specialists. The moralistic verb commit is associated with crime (in the justice system) and sin (in religion), deepening the emotional pain surrounding this sensitive but important subject—and thickening the barriers to talking openly about it.

We’ve also replaced all instances of the noun addict to a person addicted to or a habitual user of.  These changes foreground the fact that people who have addictions are human beings, first and foremost. For instance, our new entry for the second sense of user now reads: “a person who is addicted to or abuses a controlled substance or alcohol; one who uses illegal or addictive drugs.”

We implemented our changes to addict in parallel with revisions to the sometimes offensive noun alcoholic, which we now define as “a person with alcoholism or alcohol use disorder; a person addicted to intoxicating drinks.”

The English language has many words, from disparaging slang and informal expressions to technical terms, for people who—while they may not have alcohol use disorder, another new entry in our dictionary—are habitual drinkers of alcohol. Historically, words used for these people, like lush or dipsomaniac, have been glossed using the noun alcoholic; we revised our definitions of these terms to be in line with whole-person language.

Referring to people with addictions as addicts or alcoholics reduces them to a label—and one long connoting moral failure and weakness of character—and defines them by only a single aspect of their complex humanity.

Combined, our updates surrounding addict and alcoholic improved over 50 entries.

Defining the animals we depend on

While fewer of us are doing so during the coronavirus, air travel in recent years has introduced such terms as emotional support animal and therapy animal into our lexicon. Such terms are often used interchangeably in colloquial settings, but their differences matter.

Domesticated animals enrich our lives and contribute to our general happiness, but the specific physical, emotional, and cognitive benefits they can provide—as well as the training, legal status, and scope of work they have therein—varies.

We defined, and distinguished, the terms for six such animals:

Thirty years after the passage of the Americans with Disabilities Act, it’s more vital than ever to give, as one highlight, service animal its lexicographical due: “an animal that is specially trained and able to provide assistance to a person living with a disability, as guiding a blind person.”

Race and ethnicity, gender and sexuality, health and wellness—these topics of identity represent some of the most serious and sweeping changes in our dictionary update. But our release covers many other urgent areas, not least of which is the environment.

We’ve added a wide range of words concerning the animal kingdom, weather, climate change, and the human impact on a changing natural world, such as:

As ever, digital technology is itself a kind of livestream of new words—and changing faster than any dictionary can ever keep up with. Some of this novel terminology involves new technology and services. Other new terms reveal how technology is transforming our lives and behaviors, for better or worse. Some highlights are:

As our tech term upgrades show, the dictionary will never keep pace with the great churn of the English language—but it’s not supposed to.

Especially as it concerns new words and new senses, our dictionary editors patiently monitor lexical changes for widespread, sustained use. Many word trends are just that: trends, with a lifespan ranging from one news cycle up to several years. Other words have long been active (e.g., emotional labor) but only recently spread into mainstream use.

How do words get into the dictionary, anyways? Our experts explain.

Here’s a selection of new entries, drawn from everywhere—business to gaming to fashion to psychology to the social and political forces that have defined the late 2010s:

Change is constant, a principle that’s true in language as in life. No matter what is happening in the world, we’re committed to documenting and describing—and helping you stay informed on and, yes, sometimes entertained by—the English language as it evolves. Fifteen thousand entries updated. And counting.

Previous "Barbecuing," "Grilling," And "Smoking": What's The Difference? Next "Affect" vs. "Effect": Use The Correct Word Every Time
RELATED POSTS